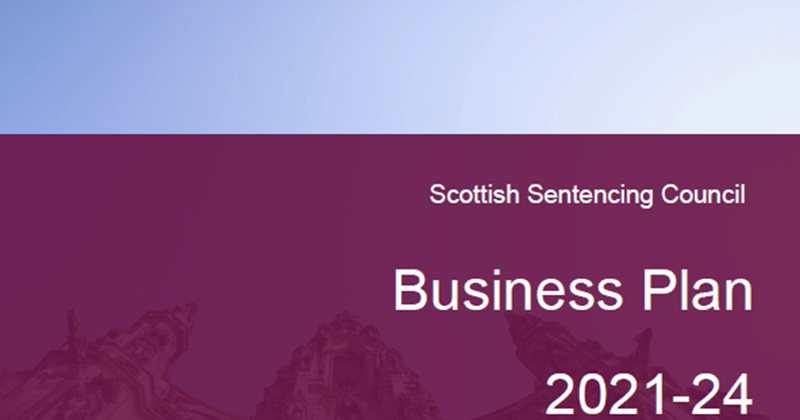 The Scottish Sentencing Council, having completed a suite of general guidelines which apply to all offences in Scotland, is now moving to a new phase of work. In its 2021-24 Business Plan, published today, the Council announced that its focus will now turn to offence guidelines and confirmed its intention to prepare a sentencing guideline on domestic abuse offences.

Also included in the work programme will be the continuation of the development of guidelines for death by driving, the sexual offences of rape, indecent images of children, and sexual assault, as well as on sentence discounting, and the resumption of work on an environmental and wildlife offences guideline.

The Council has also indicated its desire to undertake increased activity in pursuit of its statutory objective to assist with policy development. With members drawn from a broad range of criminal justice organisations and every tier of the judiciary, as well as the ability to carry out targeted research on sentencing matters, it is uniquely placed to assist with policy development and to help ensure that proposals relating to sentencing are fully considered and practicable.

Following an innovative consultative exercise with sheriffs in 2021, which resulted in the identification of barriers to, and opportunities to improve, judicial confidence in community sentencing, the Council intends next to explore the important issue of sentencing people with mental health issues and will carry out research in that area.

A further, and equally important, element of the Council’s efforts over the next three years will be in the area of public education. While each of the strands of work identified within the business plan will support better awareness and understanding of sentencing, the Council will carry out a range of projects specifically designed to contribute to this goal. This will include developing further resources for use in schools and universities and in training settings, assisting other organisations in developing their own information and resources and training materials, and carrying out face-to-face engagement.

To that end, the Council has also published a three-year communications and engagement strategy setting out how it will fulfil this aim. In line with the business plan priorities, Council communications during the period will concentrate on three key areas: explaining sentencing; community-based sentences; and sexual offences and gender-based violence.

The extent to which the full range of activity described in the business plan can be fulfilled within the next three years will be dependent on the outcome of the Spending Review and future decisions on the Council’s budget.

“With the completion of our first tranche of guidelines of general application, we can now make progress with offence guidelines, the first of which will be on causing death by driving offences.

Gender-based and sexual violence continues to be of concern to the Council and in addition to continuing our work on sexual offences we will begin the development of a domestic abuse guideline.”

Having now established a general framework for guidelines, we will also increase our activity in pursuit of our statutory objectives to assist with policy development and to promote awareness and understanding of sentencing. Knowledge and understanding is critical to public confidence and it is our hope and desire that our efforts in this area will have longstanding benefits in this regard.”

Prev Back to News