Sentencing guidelines to be developed on rape, sexual assault, and indecent images of children 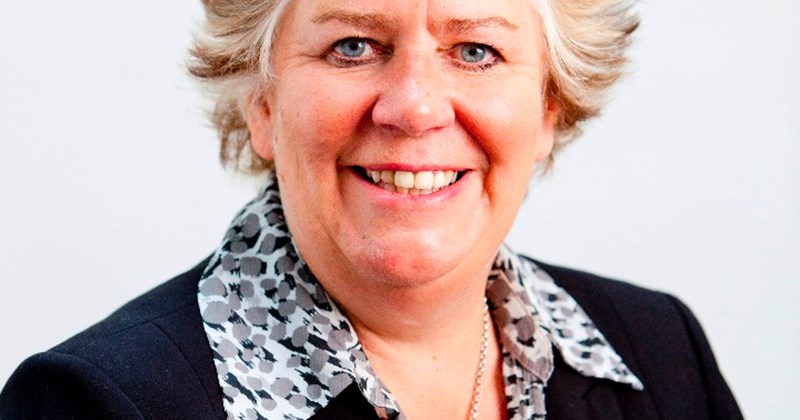 The Scottish Sentencing Council will develop multiple guidelines on sexual offences, beginning with rape, sexual assault, and indecent images of children, Lady Dorrian, Lord Justice Clerk and Chair of the Council has announced.

The Council’s decision on the initial focus for its guidelines on sexual offences is contained in a letter from Lady Dorrian to the Cabinet Secretary for Justice, Humza Yousaf, in which she also updates him on how the organisation’s work programme will be re-prioritised to place more emphasis on this topic.

The Council committed to developing guidelines on sexual offences in its 2018-2021 business plan, which was published in October last year.

In her letter to the Cabinet Secretary for Justice, Lady Dorrian said: “At its most recent meeting on 2 May 2019, the Council discussed its approach to the development of guidelines on sexual offences. 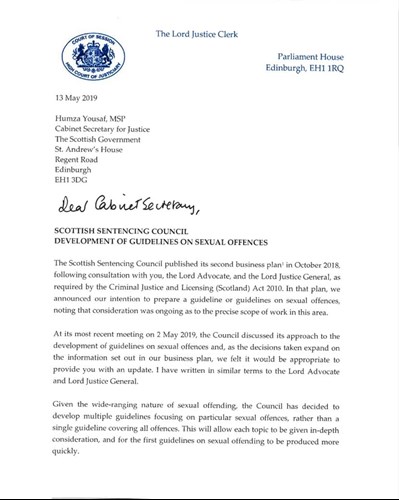 “Given the wide-ranging nature of sexual offending, the Council has decided to develop multiple guidelines focusing on particular sexual offences, rather than a single guideline covering all offences. This will allow each topic to be given in-depth consideration, and for the first guidelines on sexual offending to be produced more quickly.

“Taking into account the information we have gathered to date, the Council has decided to begin its work on sexual offences by developing sentencing guidelines in relation to rape, sexual assault, and indecent images of children.”

The Council has already carried out some preparatory work on sexual offences including holding discussions with the judiciary and victim support organisations to help it identify particular challenges in sentencing, priority areas for guidance, and topics for further research.

A stakeholder conference was held in 2018, which sought views from various organisations and individuals with an interest and experience in this area. A report from this conference has been published today.

The Council has also taken the decision to defer development of its planned guideline on environmental and wildlife crime in order to prioritise the sexual offences guidelines. It was noted that work in this area is at an early stage, and a delay may have been required in any case as a result of Scottish Government plans to increase penalties for wildlife crime following the recommendations of the Wildlife Crime Penalties Review Group.

“We recognise the considerable interest in sentencing sexual offences, and we have listened carefully to views expressed by the public, judiciary, victim support organisations, the Scottish Parliament and others in considering how best to proceed. Our priorities are always under review as new areas of work develop and, on balance, we consider that guidelines on sexual offences should take precedence over certain other areas of work at present.

“Specifically, we intend to deprioritise the development of a guideline on environmental and wildlife offences during the current business plan period, in order to allow more resources to be allocated to work on sexual offences.

“While we recognise the desire to have sentencing guidelines on sexual offences in place as quickly as possible, as I have noted previously the potential impact of guidelines which have not been properly considered and tested would be considerable, both for individual cases and for the justice system as a whole. Taking the necessary time to get guidelines right is vital, especially when dealing with a wide ranging, sensitive, and complex area such as sexual offending.”

As well as developing guidelines on sexual offences, the Scottish Sentencing Council will continue with the ambitious programme of work set out in its 2018-2021 business plan. This will include launching two public consultations in 2019.

The first of these, on the draft “Sentencing process” guideline, will be published in the coming weeks. This guideline sets out the various steps the courts go through when making sentencing decisions, and some of the factors they take in to account. Later this year there will also be a public consultation on a draft guideline setting out how young people should be sentenced.

The process the Council will normally follow in developing sentencing guidelines has been published on its website - https://www.scottishsentencingcouncil.org.uk/sentencing-guidelines/

The full letter from Lady Dorrian to the Cabinet Secretary for Justice is available to view here. The letters to the Lord Advocate and Lord Justice General were in similar terms.