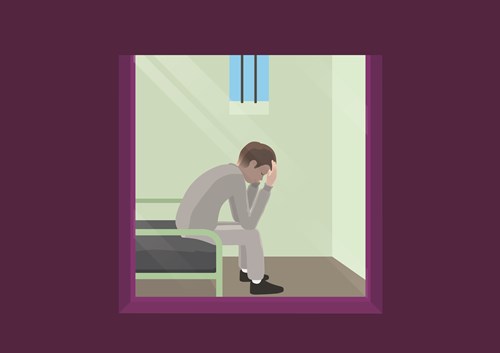 A custodial sentence means more than just time in prison. In most cases, people will serve part of their sentence in the community. If they commit an offence while serving their sentence in the community, the court can order their return to prison. If they spent any time in custody while their case went through the court process, the judge must take this into account. The judge can backdate their sentence to start from the time they first went into custody or any time after that. See the legislation for more detail.

If a person is convicted of more than one charge, a judge can give prison sentences on each charge separately. The judge can give sentences for each charge to run concurrently (at the same time) or consecutively (one after the other). If the judge sets a single sentence for all the charges taken together this is called in cumulo.

People given a short term sentence normally will be automatically released from prison into the community after serving half the time in prison. For example, offenders sentenced to two years imprisonment will be released to serve the rest of their sentence in the community after one year. The person isn’t normally supervised by a social worker unless they are a sex offender convicted on indictment (more serious crime), or is placed on a Supervised Release Order.

A person given a long term sentence can serve all but the final 6 months of the sentence in prison, unless the Parole Board for Scotland recommends that they should be released earlier into the community. The Parole Board will only start to consider whether or not to release the person into the community as they approach the halfway point of their sentence - the earliest point at which they normally can be released. If an offender is not released, the Board will re-consider parole within 16 months.

When people serving a long term sentence (and people sentenced for sexual offences to a period of six months or more) are released into the community, they will be ‘on licence’ until their sentence finishes. They can be recalled to prison if they commit an offence or otherwise breach the terms of this licence. For more information on what factors are taken into account by the Parole Board for Scotland when considering release on licence see their FAQ webpage.

An extended sentence combines a period in prison with a further set time of supervision in the community (the extension part). It is used to protect the public and can be given to offenders who have committed a sexual or violent crime; or abduction on indictment (more serious crime). For a violent crime or abduction, the custodial term of the sentence must be four years or more. The person serves the full prison part of the sentence - unless the Parole Board for Scotland recommends early release. When released they are on licence until the end of the extension part of the sentence and can be recalled to prison if they breach the terms of their licence. The extension period of the sentence in the community can be up to 5 years for sheriff court cases and up to 10 years for High Court cases.

These are sentences that do not have a set end point, such as a life sentence. However, the judge will set a punishment part for such sentences which is the minimum time an offender must spend in prison. After that time, they can be considered for release on licence by the Parole Board for Scotland. Each time release from prison is not recommended, it will be reconsidered within two years.

Life sentences must be given for murder under the law, but they can also be given for other extremely serious offences such as repeated rape. If a person is sentenced to life imprisonment, the judge must, by law, set a punishment part of the sentence. This is the minimum time the person must spend in prison before they can be considered for release into the community by the Parole Board for Scotland. Depending on the circumstances of the case, the punishment part can be lengthy. To date, the longest punishment part given in Scotland is 37 years. If a person sentenced to life imprisonment is released into the community, they will be on licence for the rest of their life and can be recalled to prison if they breach the terms of their licence.

An OLR is a lifelong sentence put in place to protect the public. It is a sentence of imprisonment which can be imposed on people convicted at the High Court of a serious violent offence (other than murder), a serious sexual offence, an offence which endangers life, or an offence which indicates a tendency to serious violent, sexual or life-endangering offending. The court must impose an OLR where it appears that, because of the nature or circumstances of the offence, there is a likelihood that the offender will in the future seriously endanger the lives, or physical or psychological well-being, of members of the public, if he or she is not in custody.

The judge must set a ‘punishment part’ of the OLR which is the minimum time the offender must spend in prison before being considered by the Parole Board for Scotland for release into the community. If offenders are considered to be safe to serve the rest of their sentence in the community, they will remain under the intensive supervision of a criminal justice social worker. If the person commits another crime, they can be sent back to prison. Read more.

Parole Board for Scotland

The Parole Board for Scotland will only recommend that prisoners are released into the community when it considers that they are no longer a danger to the public (while under the conditions of their licence). The Board’s recommendation, along with conditions of supervision, goes to the Scottish Ministers who make the decision.

When people are released from prison into the community ‘on licence’ or ‘on parole’, it means following certain rules, for example, wearing an electronic tag, staying home at night, and meeting with a criminal justice social worker. If they do not follow the conditions, they can go back to prison to serve the rest of their sentence. The licence will last until the sentence is finished.

A judge can impose a SRO for people convicted of an offence on indictment (more serious crime) to come into force once they have been released from prison. It is put in place in order to protect the public and can last up to 12 months. It orders the offender to be under the supervision of a criminal justice social worker and follow any conditions that have been set, such as a requirement to attend drug counselling. Offenders who breach a SRO can be returned to prison. A judge can only use the Order if an offender is sentenced to a short term sentence (less than four years in custody) and the offence is not a sexual one.

Some offenders (but not sex offenders) can be released wearing an electronic tag to serve more of their sentence under supervision in the community. The Scottish Prison Service (SPS) decides whether to allow a Home Detention Curfew. See the SPS website for further information. Offenders must stay at an agreed address for about 12 hours every night. Other conditions can be set for each person depending on their offence. Offenders sentenced to less than 4 years can be released on Home Detention Curfew between 2 weeks and 6 months early (before the half-way point of their sentence). The release with an electronic tag of prisoners sentenced to 4 years or more must be considered by the Parole Board for Scotland.

In prison, different programmes are in place to address offending behaviour including mental health and anger issues.

Under this scheme, in some cases, victims have a right to get information about when a prisoner becomes eligible for community access. Victims also have the right to send comments to the Parole Board when the prisoner's release is being considered. It is up to the victim to register for this scheme. For more information and contact details, see the Scottish Prison Service website.

For more information on how prisons and young offenders' institutions deal with offenders, see our blog, 'Prison visits'.