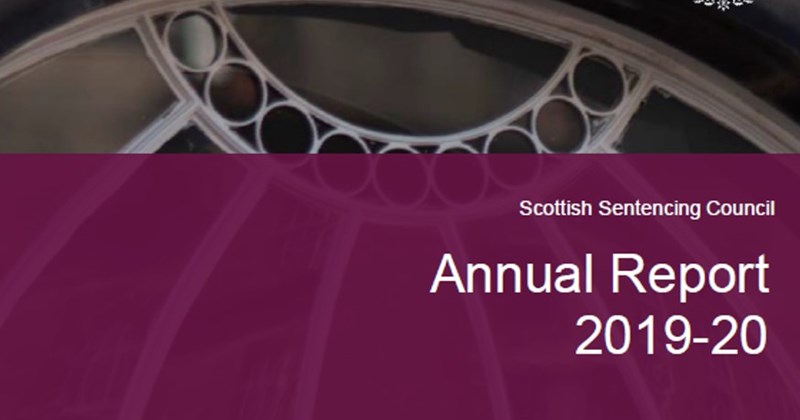 The Scottish Sentencing Council’s 2019-20 Annual Report has been published and laid before the Scottish Parliament.

During the year ending March 2020 the Council embarked on two public consultations. One on a draft sentencing process guideline, which concluded in September 2019 and another on a proposed sentencing young people guideline which launched in February 2020. The Council has committed to carrying out public consultations on all its draft guidelines, in order to get the widest possible range of views and expertise on their content and potential effects.

Significant progress towards the finalisation of each of these guidelines has been made and both will be submitted to the High Court for approval once consultation responses have been considered and any final revisions made.

The consultations were conducted using a new online consultation platform, which the Council introduced during the year in order to bring efficiencies to the process and improve the experience for respondents.

The Council also continued its work on developing the other guidelines which are set out in its 2018-21 business plan.

Drafting of a guideline addressing offences of causing death by driving commenced under the auspices of a dedicated committee and in the next stages of its development it will be subject to testing by sentencers.

The Council announced in summer of 2019 its intention to prioritise the development of guidelines on sexual offences and began initial research and stakeholder engagement to assist with the preparation of guidelines on rape, sexual assault and indecent images, to be overseen by a new Sexual Offences Committee.

Work on the development of an environmental and wildlife crime guideline was paused in order to allow for proposed changes in penalties for wildlife crimes (now legislated for in the Animals and Wildlife (Penalties, Protections and Powers) (Scotland) Act 2020) to bed in and to allow greater priority to be given to guidelines dealing with sexual offences.

A wide range of research has been carried out, including literature reviews on sentence discounting, youth offending and sentencing, and a systematic review of the available evidence on cognitive maturity in young people, which informed the proposals contained in our draft sentencing young people guideline.

In addition the Council published the findings of a national survey, carried out on its behalf by Ipsos MORI, on public perceptions and understanding of sentencing in Scotland. The first survey of its kind in the Scottish context, it revealed that when presented with detailed case scenarios, members of the public generally choose a sentence which is in line with the actual sentence which would have been imposed in court.

Activity during the recent Covid-19 pandemic is not covered in this Annual Report, with the significant disruption experienced only coming  towards the end of the reporting period. Lady Dorrian, Lord Justice Clerk and Chair of the Scottish Sentencing Council, nonetheless extends her gratitude to all members, past and present, many of whom have been, and continue to be, directly involved in the wider response to the pandemic, for their contributions.

In the coming year the Council will consider what should be included in its next business plan covering 2021-24. In particular, consideration will be given to the need for a guideline on domestic abuse and the outputs from a mental health roundtable event held last year.